School of Community Resources and Development

School of Community Resources and Development 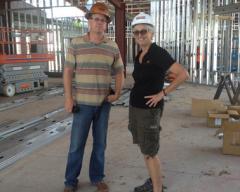 When Mary Schmit took over as general manager for Venture Out at Mesa, the active retirement community for people older than 55 was starting to show its age.

The 30-year-old RV resort and homeowners association had not seen major improvements in infrastructure for some time, and was having problems renting and selling their homes despite a relatively stable economy.

"The property was no longer contemporary and amenities looked older," Schmit said. "They recognized if they didn't step up and make some changes, Venture Out would fail to attract new home buyers and lose out in the marketplace."

Based on Schmit’s experience in Deadwood, South Dakota, where she redeveloped her own historic hotel and served on the city’s Historic Preservation Committee, she recommended that Venture Out implement a professional long-term plan, similar to the one that had helped to revitalize the community of Deadwood.

After looking at some professional plans for other communities, the Venture Out Condo Board agreed. In spring of 2002, they voted to hire Wendy Hultsman for an 18-month project that would help revive the community and secure its future.

Hultsman, an associate professor in the School of Community Resources and Development, part of Arizona State University's College of Public Service and Community Solutions, said the community was ready to work together to make a change.

Collaboration as a model for success

Venture Out is one of a few age-restricted park model communities in the Valley, where residents own their home and the land. With a maximum living space of 930 square feet, residents spend much of their time outside of their homes in recreational activities.

“The residents had pride of ownership, and many found the wealth of activities and community spirit to be a strong draw,” said Hultsman. “At the same time, they had concerns about aging infrastructure and security. They knew they had a great population and if they wanted to stay strong as a community, they would need to do some renovation.”

Hultsman started with a needs assessment.

“Unlike most needs assessments, which are sent to each household, in an age-restricted community, two people living in the same house might have completely different interests,” she said.

So each occupant received their own questionnaire.

Surveys were sent to all owners and renters – covering everything from recreational preferences and habits in and outside of the community to opinions on potential policy changes and areas of development. Without any follow-up, nearly 60 percent of the surveys were returned.

Hultsman followed up with a town hall meeting, which led to more than 400 Venture Out residents participating in smaller individual focus groups. The outcome was a community-driven plan spearheaded by Hultsman that reflected the voice of the population.

Committing to a long-term plan

For Schmit, creating the long-term plan was similar to what she had experienced in Deadwood. "Once you talk to people and get input from everyone that wants to participate, they own the plan," she said.

The plan identified several key areas of concern, with the aging community center as the priority issue. Venture Out owners voted to replace the center with a new 40,000 square-foot facility.  The vote passed with an 88 percent turnout and 68 percent approval.

Residents were eager to start, and nearly 75 percent of the money needed for a $5 million center came in the first month after the vote.

Mike Ellis, Venture Out resident for 26 years and now president of the Venture Out Condo Board, has been involved in the planning and implementation since the beginning.

“The vote was overwhelming because of what the survey told us,” he said. “Demographics are changing, and we needed improved facilities that provided more activities.”

Since the plan's inception, Venture Out has made improvements to the gated front entrance, security, irrigation systems, electrical systems, recreational activities and landscaping among other things – all following a checklist that had been developed as part of the plan.

The last item on Hultsman’s study was completed last summer, when Venture Out owners once again voted to assess themselves and build a state-of-the-art 10,000 square-foot fitness center and pool.

“Everything we’ve done has been an improvement,” Ellis said. “And it is all because of the input of the residents.”

“While we were building, things started to happen,” Schmit said. “Younger people started moving in and sales increased dramatically. They could see there was progress.”

The average age in the community dropped from 75 to 71, a huge demographic swing in a population of 3,000.

Earlier this month, the residents celebrated when they opened the fitness center, something that Hultsman’s research predicted would be a “critical component to attracting the next wave of retiring baby boomers.” It is the last of the targeted areas for redevelopment outlined in the 2002-2003 plan.

But the improvements are not window-dressing, Schmit said. More people are using the fitness center daily, noting that the daily numbers “have quadrupled since the center opened, with many residents learning to work out for the first time.”

“Even in 2008, during the recession, when housing prices dropped around the nation, Venture Out’s home prices increased,” said Hultsman. “It is absolutely the role model of how it should be done in working with a consultant and implementing the plan over time.”

Recently the Venture Out Condo Board and the planning committee reviewed Hultsman’s study and the list of accomplishments over the last 12 years. Schmit said the enthusiasm of the community is incredible.

"We want to bring Wendy back to work with our owners again and to look at the next 15 years," Schmit said. "What does today’s owner and new buyer want in the future? We need to look toward the next generation, keeping the community viable."